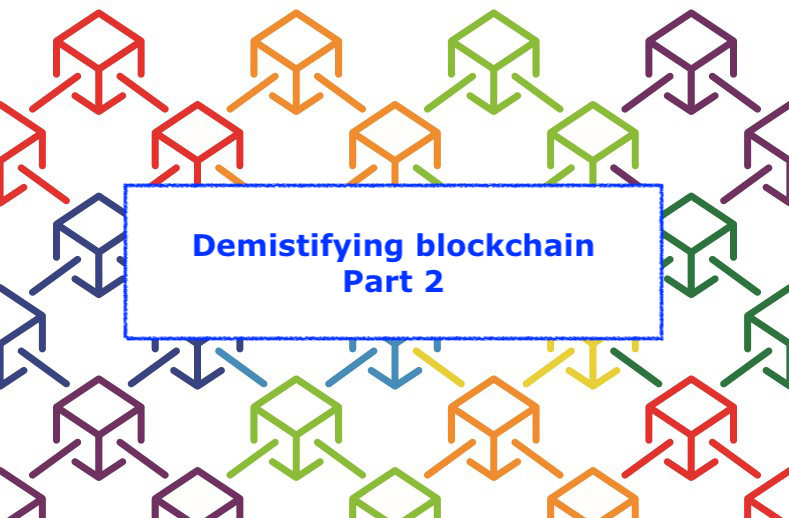 In the previous post we explained from a theoretical point of view how a block chain works. In this post we will get down to work and will implement a working blockchain in Go.

If you haven’t read it yet, we recommend you to do it now before continuing. It’ll provide you the basic concepts needed to understand the examples below.

(You can find the complete example in this Github repository: https://github.com/dplabs/demistifying-blockchain)

First of all, let’s define what a block looks like for us:

Now let’s define an structure that will help us handle the block chain:

So far we have presented two quite interesting fields: Nonce for a Block, and Challenge for a BlockChain, and the deserve a more in depth explanation. But first let’s talk about what a valid hash or signature for a block is, and for that we have to talk a little bit about Bitcoin.

When Bitcoin was designed, in order to achieve value as a coin, the concept of scarcity had to be taken into consideration: if a resource is easy to get, probably it won’t be valuable at all. The more difficult or unique the resource is, the more value people will give it. But being a digital currency, this was a not easy to solve challenge.

That’s how the concept of mining a block came into the picture: same way as gold is extracted from the ground (with lots of effort), a block has to require a lot of (artificial) effort to be added to the chain. Whomever manages to first mine a block, gets rewarded with coins in exchange for his effort.

In Blockchain, mining a block consist on calculating its hash, as we have explained. But usually hash functions are quite fast, so in order to make it harder (and thus create scarcity), a valid hash has to comply with a set of rules. In our implementation, the rule we’ve chosen is that the resulting hash has to begin with the Challenge substring defined while initializing the chain.

So in order to mine a block in our chain, the resulting signature of a block has to start with a certain string (in our example we’ve chosen it to be '0000'). So the algorithm for mining a block would first calculate current hash of the block and if the results fits the criteria of a valid hash, then we could add a successfully mined block to the chain. Otherwise we would have to change something in the block and repeat the process, and this is important, because if we don’t change anything in the block, the resulting hash will be the same. And thats what Nonce field is for. We will increment this number on every attempt to get a valid hash, until when eventually, we will get a hash matching the criteria. That’s why the longer the Challenge string is, the harder to mine a block will be.

As you can see in the following execution of our demo, it takes between 10 and 30 seconds to find a valid hash (starting with ‘0000’) for every block. If you try this yourself, you will get different results as the timestamp of a block is taken into consideration for mining it (https://github.com/dplabs/demistifying-blockchain/blob/master/block.go#L51):

We encourage you to play with this code. You can download from the repository and compile and execute it yourself: https://github.com/dplabs/demistifying-blockchain

In the following and last post of this series, we will implement some benchmarks to analyze how much time it requires to mine a block based on the difficult we set.

I write about technology, software, radio and some other interests, like Linux, Dungeons and Dragons or electronics.